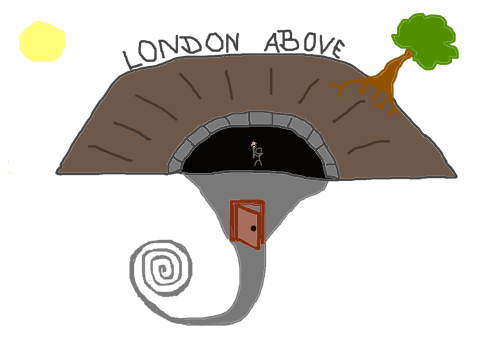 This book was suggested to me as I was scouring through the local used books bookstore as two people overheard me asking where the Neil Gaiman books are (I was actually looking for Stardust as part of a family book club). The husband and wife immediately jumped on this and suggested Neverwhere as their favorite Gaiman read. And I am so thankful they did.

Starting off I was instantly reminded of some of the darker chapters of Harry Potter (read; I loved it). London Below is just as mysterious, magical, and dangerous as Knockturn Alley. The concept of having a second, unknown London really drew me into the novel. I also very much enjoyed that this book, although both having a male (Richard Mayhew) and female (Door) protagonists, it was not at all about romance but more about friendship (at least to me it seemed to be about that).

Gaiman’s ability to create interesting, complex, and unique characters is probably the biggest feat of this story. The two henchmen are some of the most cruel and cold assassins I’ve encountered in a fantasy novel. Door is lovely and fierce, and should be a role model to many. Richard is an ordinary men accomplishing the extraordinary, a wonderful and uplifting concept. He’s human, he has human fears and worries, believes and experiences, and a naivety that can only come from a sheltered life of some sorts. Yet, his compassion leads him to selflessly help Door in world that is foreign to him and avenge her family’s death saving London Below from years of misery along the way. Throughout this journey, his noble acts and his trials and tribulations allow him to find himself discovering a whole new Richard, which teaches us that it is a good thing to reinvent yourself once in a while.

Gaiman, in my opinion, excelled in everything in this novel: character development, language, storyline, and plot twists left and right. If I wasn’t hooked on the author’s talent with The Graveyard Book, I am now!

I live, breath, and befriend books. I love the written word. Find me on my blog or on Twitter @evilbibliotaph. View all posts by ich lese